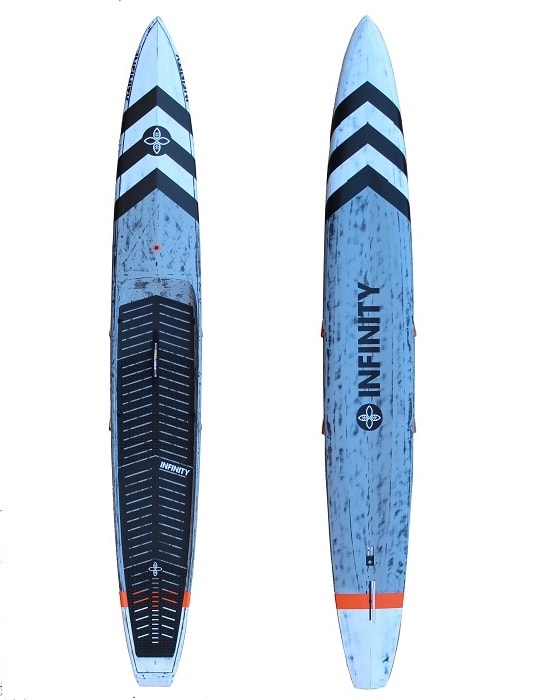 The 2020 Infinity Blackfish has been kicked hard up the ass this year with some serious enhancements, worked over by Dave and the team.

Refined nose with a piercing bow to aid upwind ability, and reduce splash which increases speed

The “Inverse V” channel underneath has been pushed back just in front of the cockpit area, and carries on to the back of the board to greater increase glide per stroke and smoooth out the draft

Greater stability and planing ability has been achieved with flat sections either side of the channel, and nice hard rails towards the tail and out the back give you a real clean release and control for when your riding waves and bumps

Who is the Infinity Blackfish aimed at?

The Infinity Blackfish is a thoroughbred racing machine that has world class pedigree under the feet of paddlers like Candice Appleby, Shae Foudy, Slater Trout, Tyler Bashor and of course Kai Lenny.

That said it has found a place worldwide with racers in both flatwater and openwater fleets as well as downwind paddlers and touring fans.

Performance PVC is available on the flatdeck only, and offers entry level affordability and durability with all of the performance we’ve come to expect from Infinity.

Only the highest quality fittings are used throughout.

The finish doesn’t chip like regular painted boards so your pride and joy will continue to look great well in to the future.

Fin boxes have been reinforced as has the carry handles and standing area for even better durability.

Level of paddler: this board is perfect for intermediate to advanced paddlers wanting a performance board to ride in a mix of conditions.

Disciplines: this is an unompromising raceboard that will deliver in conditions ranging from flat to open water swells and windblown chop.

Price /Quality ratio:  these boards come to you in 2 constructions so you can benefit from a performance board at two differing price levels.

We’re passionte about watersports and the health benefits so we’d like to Share this Love far and wide!

Drop us a message